2020 was an enormous year for most of the world. Aside from a global pandemic that changed all of our lives, cultural movements of equality and justice sprang up all over the world in the face of decades or even centuries long oppression and inequality. It seems that there has been a tipping point in our society where people’s voices, through the global MeToo movement, Black Lives Matter, and Strajk Kobiet in Poland rose up to say “no more”. It seems that every month there is a new public statement or confession from (mostly) women in the art field coming forward to reveal the abuse that they’ve suffered at the hands of male directors. This is not only a situation among women, it is universal and ubiquitous. Cases of sexual harassment, assault, mobbing, phsychological and emotional abuse have become the backdrop to our newfeeds. Even this past week the artistic director of the Greek National Theatre resigned amidst a flurry of accusations of harassment and assault. But the most disturbing thing of all of this, is that these stories are not surprising, they are sadly frequent and somewhat expected. We know this happens, because most of us in the art world have experienced it or witnessed it firsthand. Of course not all directors are abusive! The abusers are the minority, but this abuse which is always shrouded in secrecy and protection, shouldn’t exist at all. When these confessions started coming forward, especially in Poland where I have spent over a decade in the theatre, I was deeply triggered and fell into a mild depression. The pain that I had tried to move past, bury under the surface and forget about came rushing forward. I didn’t know what to do. I felt helpless and small. After time I realized that I want to engage in constructive measures to begin to CHANGE the world of art and also process my personal experiences. Our contemporary art world is full of sexism, racism, inequality, exploitation and manipulation. It is full of people who dangerously abuse their power and prey on the vulnerability of open hearted individuals and I want to see this end. I want to be a part of the change.

So, I began to question what is “safe space” within the artistic working environment? How do we even define this? And the truth is, I’m not sure. So, I decided to do a small series of interviews with remarkable artists about the idea and practice of creating “safe space”. These artists have found liberating and healthy ways of creating through modes that equalize the power in a rehearsal room, engage in consent and practice respect and enforcing boundaries. Their work is powerful and potent and their voices are precious, offering us a beacon of light to follow. I believe that we can change, and that we need to change. This is part of my offering to other artists, to give education and perspective. I hope you enjoy this as much as I have. Each interview feels like great a life lesson. I’m so grateful for these people who have offered me their insight and wisdom and I’m so excited to share this with you.

k. Jenny Jones is a Fight Master and Certified Fight Director with the Society of American Fight Directors (SAFD). An internationally recognized master teacher of Stage Combat, k. Jenny has taught and choreographed throughout the United States and abroad. Regionally, she has worked at Cincinnati Playhouse in the Park, The Ensemble Theater of Cincinnati, the Cincinnati Shakespeare Festival, and the Know Theater. A critically acclaimed actress, k. Jenny’s recent focus has been the promotion of Consent Culture in the theater and was President of the Board of Directors of Intimacy Directors International, an advocate organization dedicated to the safety of actors who participate in emotionally and physically intimate work. 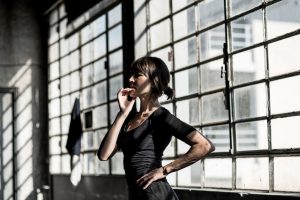 Julianna Bloodgood is a multidisciplinary theatre creator and performer. She worked with the award winning and critically acclaimed Polish theatre company Song of the Goat Theatre from 2009-2018. She was an integral part of the development, devising, premiers of performances which have won international theatre awards and toured throughout the world. In Poland Julianna was also a founding member of the pedagogical and performance research company Odra Ensemble. Julianna is a resident artist with New York based Theater MITU, and collaborates with Slovakian theatre company Honey and Dust.
In 2019, Julianna was awarded a scholarship from the Poish Ministry of Culture for her artistic research and was one of ten European independent theatre makers chosen to participate in Creative Europe’s Make A Move project.
Julianna is the co-founder of The Dadaab Theater Project, a youth based theater project in Dadaab, Kenya, formerly the world’s largest refugee camp and is a founding member and co-artistic director of The Great Globe Foundation, a non-profit organization utilizing the power of creativity to inspire and empower the individual voice and to help build bridges between people and communities.
Julianna graduated from Manchester Metropolitan University with high honors and holds an MA in Acting, a BFA in Dramatic Performance from the College Conservatory of Music, Department of Acting, University of Cincinnati; and is a graduate of the Pacific Conservatory of the Performing Arts, California. Julianna regularly teaches workshops and masterclasses internationally.