Anna Luňáková – “introduction to the studies of melancholy”

Anna Luňáková
“introduction to the studies of melancholy“

…simple things are beautiful, but they are not easy to create.

Every day I face feelings of loneliness, uprooting, a fundamental lack. I used to be absorbed in this melancholy state and considered it romantic. This unbalanced almost hysterical feeling of “youth” began to be replaced over the years by somewhat more harmonious, state of concentrated calm, but melancholy, in its natural immortality, never quite left me. On the contrary, she enchanted me perfectly. 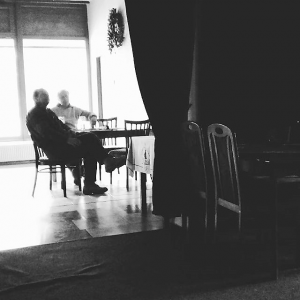 Whether I was a waitress, a cleaning lady, a bartender in a club, but also a security guard at a zoo or a hostess of tastings in shopping malls, whether I watched the workers in the glassworks where my mother worked or it was my many years lasting work with horses… I got a chance to meet people who get up for work between four and half past five in the morning. These people have a special character for me. This character, as with a blotting paper, is transcribed into their posture, facial expression, gestures, and the atmosphere that surrounds them. Whether it was during my morning departure or late return from work, on the lines of suburban buses, and therefore on the periphery of Prague connections, I always observed almost sculptural scenes of bodies, especially of male workers. And these living statues fascinated me.

Of all the “homeless people” in this world, I am most attracted to the “old man”, who by all standards has no place, no use, no consolation in this world, unless he becomes a heroic figure of a wise preacher. The word old does not mean age here. It’s a situation. An old man can also be a young woman. An old, thoughtful boy can have an old man inside him. For me, the old man is a visual archetype of melancholy.

How to turn all this into a scene? How to stage the body? And how to present the fascination to the viewer so that he gets a chance to be interested in the old man? How to let the old man speak in us?

… And how to describe this “homelessness of melancholy”?

An old man, a homeless man, a melancholic appears everywhere. First as a significant character; whether it is a teacher-philosopher or a grandfather, this unexplored, mysterious, touchingly boring character, but sometimes also an evil, cynical, convicted and alcoholic person. He is also the character of a pensioner, eternally commenting, eternally invisible… Finally, I also discovered my own “old man”.

what would a melancholic say to the silence after a storm

“When one tries to pull oneself by the hair from the swamp, one’s words keep the other, unspoken world alive. There was a fundamental derailment. This derailment is not outside of me, but I decide on it, as well as on everything else that I do not have in control. I don’t believe in the outside. I’m a swing with a compulsive balance disorder. I’m sick. I’m crossing borders while just drawing them. When the world falls apart, there is inner confusion – this is the situation of a person off the map. As can be seen, human life is doomed to failure. However, this failure is not a matter for the future, but it is always present. The specific homelessness associated with it says: There is no way to end me. There is no moment, a comparison, a point at which one has gone in the wrong direction. Even death does not stop homelessness, so I do not comply in all respects. Surely you understand where I am going – madness as a reward for everything overcoming the feeling of absence, an effort to mythologize your life. But it, as a myth, can neither be revealed nor named, but only and infinitely developed. Fortunately, madness also has brothers and sisters. They are philosophy, poetry or even divination.

We can’t forget. Loneliness that cannot be ended by death. Loneliness… This closed world, which conceives everything in such a way that it can successfully disguise even the lack… This world, the love…

Characteristic traits of the figure:

And what does this homeless person see?